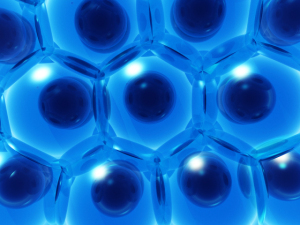 Growing organs from
stems cells, once theoretical,
has become a life-
saving reality
Physicians at four European Universities say they have successfully transplanted a windpipe into a young woman, using the patient's own stem cells to line the trachea, rather than a donor's, according to a medical journal.

A windpipe is known to physicians as a bronchus, an air passage in the lungs that passes inspired air and exhales waste gases. The trachea is a cylindral tube in the neck, comprised of cartilage and a membrane, which at one point breaks off into two bronchi.

Because the patient's own cells were used in the transplantation, surgeons were able to prevent organ-rejection and avoid giving her immuno-suppressive drugs, which require a host of lifestyle restrictions.

The article was published in the British medical journal The Lancet. The physicians involved in the surgery were from universities in Bristol, England, Barcelona, Spain and Padua and Milan, Italy. The surgery was performed by Dr. Paolo Macchiarini in Barcelona in June 2008.

The patient, Claudia Castillo, a 30-year old mother of two, first suffered from a collapsed airway following a severe case of TB. She was hospitalized in March 2008 with such acute shortness of breath that she was unable to carry out simple domestic duties or care for her children.

The only conventional option remaining was a major operation to remove her left lung, which carries a risk of complications and a high mortality rate, a Bristol University statement said.

Based on successful laboratory work previously performed by the team and given the urgency of the situation, it was proposed that the lower trachea to the patient's left lung should be replaced with a bioengineered airway based on a scaffold of a human trachea, Bristol said.

A segment of trachea, about three inches long, was taken from a 51-year old man who had died of a cerebral hemorrhage. (Spain has a policy of assumed consent for organ donation.)

The donor cells were removed from the trachea by way of a new technique and within six weeks, the donor's trachea was 100 percent devoid of its own stem cells.

Physicians then took these cells from the patient's own bone marrow, already grown into a large population in Professor Martin Birchall's lab at the University of Bristol. They had matured into cartilage cells, like the ones in a normal human trachea.

The donor trachea was then seeded with the patient's cells on the outside using a bioreactor that incubates cells. In order to replicate the lining of the trachea, cells were seeded into the inside of the trachea using the same bioreactor.

Four days after seeding, the graft was used to replace the patient's left main bronchus.

Professor Macchiarini, lead author of the paper, said, "We are terribly excited by these results. Just four days after transplantation, the graft was almost indistinguishable from normal bronchi.

Martin Birchall, professor of surgery at the University of Bristol, said that he believes this success has proved that "we are on the verge of a new age in surgical care."

Meanwhile, Ms. Castillo had no complications from the operation and was discharged on the 10th day after surgery. She has remained well. In fact, she told University of Bristol officials that one of her hobbies is going out dancing in the evening.