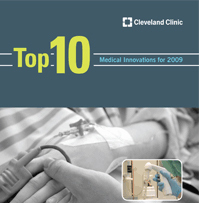 Top 10 Medical
Innovations for
2009
Imagine if a simple blood test could detect recurrent cancer earlier, while also predicting a patient's prognosis, Cleveland Clinic physicians say. Or imagine if a device the size of two decks of cards could help a paraplegic breathe without a bulky ventilator. Or imagine if a machine could essentially keep harvested organs alive until they're transplanted in the recipient.

7. LESS and NOTES Applications: LESS (laparoendoscopic single-site surgery) takes laparoscopic surgery to an entirely new level by reducing the process to a small cut in the belly button. NOTES (natural orifice transluminal endoscopic surgery) bypasses normal laparoscopic incisions altogether. Instead, the surgeon gets to an appendix, prostate, kidney, or gallbladder through one of the body's natural cavities, such as the mouth, vagina, or colon.
1(current)
2
3