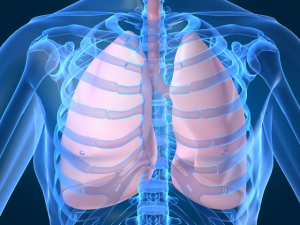 Lungs now reconditioned
for transplant
In a first, transplant surgeons at Toronto General Hospital (TGH), in collaboration with a company called Vitrolife, have "reconditioned" lungs that were previously unsuitable for transplant and then successfully transplanted the lungs into patients waiting for a donor.

The ground-breaking technique involves taking the injured lungs to the Toronto hospital, where they are transferred to a protective, bubble-like chamber.

Then, a team of surgeons led by Dr. Shaf Keshavjee, head of the Lung Transplant Program at TGH, use an "ex vivo" or outside the body approach that continuously pumps a bloodless solution containing oxygen, proteins and nutrients into injured donor lungs, so they are ready for transplantation. The technique is called the Toronto XVIVO Lung Perfusion System.

"Unlike current cooling lung preservation techniques that inhibit cell metabolism and the possibility of any active repair processes prior to transplantation, the Toronto technique maintains donor lungs at a normal body temperature of 37 degrees Celsius, allowing for future organ repair and gene and cell therapy strategies to be used," TGH researchers say.

Andy Dykstra, 56, was the first patient to receive the XVIVO transplant on December 5, 2008. He had been waiting for a transplant since July 30. When his surgeon first told him about the experimental technique this month, Dykstra said that he waited only two seconds before deciding to try it. "When I was given this chance, the hair on my arms stood up, I was so excited," he said. "I knew it was right. I just had to go for it."

To date, four patients have received lungs using the XVIVO technology and all are doing well, TGH officials said. So far, Dykstra is the only patient to receive a lung that did not meet standard transplant criteria. Three other patients received donor lungs that met transplant criteria but were further reconditioned. All TGH patients waiting for a lung transplant are eligible to be part of this clinical trial.

"We are extremely pleased that Andy is doing so well," Dr. Keshavjee said.

He said that Dykstra was able to breathe without any mechanical assistance just four days after the transplant and was discharged from the hospital 12 days after the procedure was done.

"This achievement was the result of years of research and pre-clinical planning by a large team of researchers, surgeons, physicians, nurses and other specialists," Dr. Keshavjee said. "It means that many more donor lungs which we could not have used before can now potentially be used safely, and it sets the stage for more sophisticated molecular and cellular repair techniques to be applied [using] the Toronto XVIVO Perfusion System so that transplant outcomes can be further improved," he said.

Dr. Keshavjee noted that "the potential exists to immunologically "pre-prepare" the organ before it even sees the recipient's immune system."

He said that that currently, only about 15%-20% of donor lungs are acceptable for transplantation since lungs are susceptible to injuries during the brain-death process or from intensive care unit-related lung complications. These numbers can easily be doubled with this technique to treat and improve donor lungs, Dr. Keshavjee said.