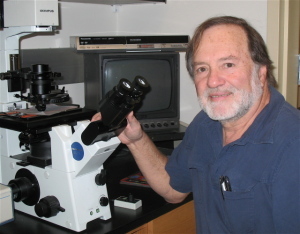 UCSB researcher Les Wilson
While it has been known for some time that eating cruciferous vegetables, such as broccoli, cauliflower, and cabbage, can help prevent breast cancer, the mechanism by which the active substances in these vegetables inhibit cell proliferation was unknown -- until now.

Scientists in the UC Santa Barbara laboratories of Leslie Wilson, professor of biochemistry and pharmacology, and Mary Ann Jordan, adjunct professor in the Department of Molecular, Cellular, and Developmental Biology, have shown how the healing power of these vegetables works at the cellular level. Their research is published in this month's issue of the journal Carcinogenesis.

"Breast cancer, the second leading cause of cancer death in women, can be protected against by eating cruciferous vegetables such as cabbage and near relatives of cabbage such as broccoli and cauliflower," said first author Olga Azarenko, who is a graduate student at UCSB. "These vegetables contain compounds called isothiocyanates which we believe to be responsible for the cancer-preventive and anti-carcinogenic activities in these vegetables. Broccoli and broccoli sprouts have the highest amount of the isothiocyanates.

"Our paper focuses on the anti-cancer activity of one of these compounds, called sulforaphane, or SFN," Azarenko added. "It has already been shown to reduce the incidence and rate of chemically induced mammary tumors in animals. It inhibits the growth of cultured human breast cancer cells, leading to cell death."

Azarenko made the surprising discovery that SFN inhibits the proliferation of human tumor cells by a mechanism similar to the way that the anticancer drugs taxol and vincristine inhibit cell division during mitosis. (Mitosis is the process in which the duplicated DNA in the form of chromosomes is accurately distributed to the two daughter cells when a cell divides.)

Hundreds of tiny tube-like structures, called microtubules, make up the machinery that cells use to separate the chromosomes. SFN, like the more powerful anticancer agents, interferes with microtubule functioning during mitosis in a similar manner to the more powerful anticancer drugs. However SFN is much weaker than these other plant-based drugs, and thus much less toxic.

"SFN may be an effective cancer preventive agent because it inhibits the proliferation and kills precancerous cells," said Wilson. It is also possible that it could be used as an addition to taxol and other similar drugs to increase effective killing of tumor cells without increased toxicity, Wilson said.