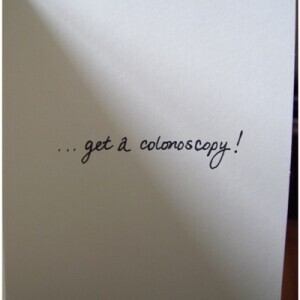 Reminder
Much of the health care IT debate focuses on physicians, with primary care doctors often pointing out that they are overwhelmed with administrative work and can't be expected to send every patient a mailed reminder that they're due for a colonoscopy.

However, researchers found that when mailed reminders generated by electronic data were sent, screening rates increased.

A 15-month study looking at 21,860 patients and 110 primary care physicians from 11 Harvard Vanguard health centers found that patients who received mailed reminders that they were due for colorectal cancer screenings were more likely to schedule screenings than those patients who weren't reminded.

About 44 percent of patients who received a reminder in the mail were screened, versus 38 percent who did not, a 16 percent relative increase. Regrettably, electronic reminders to physicians telling them that these same patients were due for screenings produced no significant increase in compliance.

"We had a large group of people who needed to be screened for a very important condition. If we provided them with basic information about colon cancer and their need for screening, this approach was more effective than simply leaving it all up to the doctor," says Harvard Medical School professor of medicine and health care policy, John Ayanian.

These findings were published in the February 23 issue of Archives of Internal Medicine.

EMR and Mail a Good Combo

In one arm of the study, Dr. Ayanian, who is also a professor of health policy and management at the Harvard School of Public Health, looked at a group of patients aged 50 to 80. Using data generated by an electronic health record, they were able to isolate a large group who were overdue for colorectal cancer screening.

One group of patients was randomly chosen to receive a personalized letter indicating their history of colon cancer screening exams, education literature on colon cancer, plus a fecal occult blood test kit and instructions for scheduling either a sigmoidoscopy or colonoscopy. The remaining patients received the usual screening preparations without this extra information. Not only did 44 percent of the first group get screened, but the effect increased with age; the older, the more compliant. In fact, among patients between 70 and 80 years old, screening rates increased from 37 percent to 47 percent among those who received mailed reminders, a 27 percent relative increase.

Some physicians were also chosen at random to receive electronic reminders indicating that their patients were overdue for screening. The fact that up to one third of the patients did not visit their physician during this 15-month period may very well have contributed to these results.

"Getting something in the mail might seem low tech, but it was only possible because in these health centers electronic medical records already existed," says Dr. Ayanian. "People speak of primary care being in crisis and that there's too much for physicians to get done in a regular workday. But here we see that patients can take a more active role in their health care. We often don't give enough credit to patients for their ability to own their health care. But here's some evidence that patients can better manage their health care if we arm them with the right information."