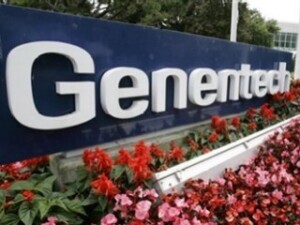 Genentech
Genentech held a special shareholder's meeting Monday in a New York City hotel to explain to shareholders why Roche's $86.50 hostile bid severely undervalued the biotech company. Genentech pushed up the date of its annual meeting so it could speak to holders before Roche's tender offer expires on March 12.

"We don't believe the tender offer adequately reflects the value and future prospects of Genentech's business," said Art Levinson, chairman and chief executive officer of the company. A special committee of Genentech's board has valued the company at $112 a share, considering its rich portfolio and pipeline of molecular drugs.

Levinson told shareholders that U.S. sales of its drugs would leap 79 percent to more than $17 billion by 2015, driven by its cancer drug, Avastin. He also predicted a 16 percent compound annual growth rate in earnings per share for five years ending in 2015, and said as many as 15 new drugs are expected to win approvals by that year.

The company also said it is expanding its portfolio beyond its blockbuster cancer niche to include drugs for Alzheimer's disease, infectious diseases and cardiology.

David Ebersman, Genentech's chief financial officer, described 13 "points of divergence" with Roche that reflect the $25.50-a-share valuation difference in Roche's bid versus Genentech's valuation of its company. They include disagreement over projections of long-term growth, future tax rate and the value of rights to Genentech's drugs outside the U.S., which Roche owns until 2015. To make his point, Ebersman showed a slide of Roche's drug pipeline as of the end of 2008. It listed 78 drugs in mid-to-late stages of development, with those involving Genentech drugs shown in blue. Then he deleted the Genentech studies and just 21 drugs remained. (Genentech's drugs also belong to Roche as Roche bought a majority stake in Genentech in 1990.)

The four-hour meeting did nothing to assuage Genentech holders. In Monday's broad market sell-off, its shares dropped $3.96, to $81.59 in 4 p.m. New York Stock Exchange composite trading.

One reason Genentech shares are trading so low is that there is an "escape clause" hidden in Roche's Feb. 9 takeover proposal, letting the Swiss drug maker drop its $86.50-a-share bid--already lowered from its original 89-a-share offer--if Genentech shares drop more than 15 percent. That drop has occurred.

Roche says it is committed to buying Genentech and has already raised billions of dollars to finance the deal, but Genentech shareholders still fear Roche might walk away from the buyout.

That is unlikely, as Roche will lose its international rights to all of Genentech's medicines in the year 2015 and the billions of dollars that go with them. More important, Roche's pipeline is not chock full of promising drugs as is Genentech's. Analysts say Roche will face a crisis if Roche loses Genentech's portfolio of drugs, since Roche's medicines are due to lose patent protection and will soon face competition from generic drug makers.

Another crucial factor facing Genentech holders is the current FDA trial for colon cancer, testing Avastin for the first time in early-stage disease. Results are expected in April. If the drug wins approval, it could help boost U.S. sales of Avastin to $10 billion, from $2.6 billion in 2008, Genentech says. If the trial is negative, it would undermine Genentech's leverage to reject Roche's hostile bid. Investors at the meeting expressed annoyance at having to decide whether to tender their shares before the trial's results are announced.