Body Scanning at Airports: Will it Fly? 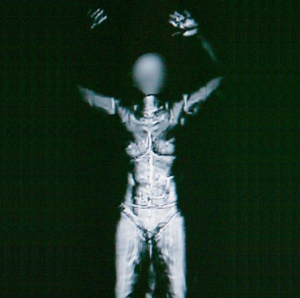 Passengers step into the machine for about two seconds, hear a whir around them, and if all is well, are allowed to catch their flights. The officials who screen the images are in a remote location in the airport.

When the "pilot" program using the millimeter wave scans at 20 airports around the country first began, agency officials thought they would use the scans solely for passengers who set off metal detectors. But passenger response to the new technology was so positive that TSA thought fliers would prefer it to the physical pat-downs and electrical wand inspections now being used.

Passengers will surely like the fact that since millimeter wave technology detects weapons, explosives and other objects concealed under layers of clothing and in travel-on bags, the agency will be able to drop its much-maligned rule that says passengers can carry liquids or gels only in containers holding 3.4 ounces or less. But whether fliers will be accepting of a body scan that sees them naked remains to be seen.

TSA insists that passenger privacy will be ensured. "The officer attending the passenger cannot view the image, and the officer viewing the image is remotely located and cannot see the passenger, Additionally, the image cannot be stored, transmitted or printed and is deleted immediately after being viewed. Finally, the facial area of the image has been blurred to further ensure privacy," TSA says.

What's more, TSA says that the millimeter wave technology will remain voluntary for passengers; those who do not wish to receive a body scanning will undergo metal detector screening and a pat-down.

Officials said that they will begin using the machines after awarding contracts to manufacturers this summer and that most airports would begin installing the scans later this year. The New York Times reported that the machines will cost anywhere from $100,000 to $170,000 each.

The radiation dose passengers receive is equivalent to the ambient radiation received in two minutes of airplane flight, TSA says.