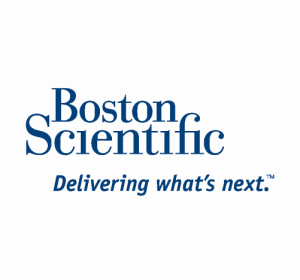 Because earnings were 7 cents higher than Wall Street predicted, Boston's shares climbed 57 cents, or 6.6 percent, to $9.26 in aftermarket trading on Monday. At the 4PM closing bell, the stock traded at $8.69.

Boston said sales edged down slightly to $2.01 billion. But without the effects of the strong dollar and divestitures, sales would have climbed 4 percent, the company said.

Cardiovascular sales were down slightly due to the effects of currency-exchange rates. The drop also included a small decline in sales of drug-eluting stents to $489 million.

Meanwhile, sales in its cardiac-rhythm business, including pacemakers and defibrillators, climbed 4 percent to $589 million.

Boston also took a $50 million charge related to a separate lawsuit brought by a radiologist who alleged the company's drug-coated stents infringed on his own patent. Those losses were partially offset by a one-time gain of $63 million due to the resolution of a tax problem related to a previously divested business.

For the year, the company forecast adjusted profit of 80 cents to 90 cents per share, and sales between $8.0 billion and $8.5 billion. Boston cut its full-year estimates for net income to between 46 cents and 57 cents per share, as a result of its current patent litigation expenses.

Analysts predict the Natick, MA, company will earn 58 cents a share on sales of $8.16 billion for the full year.

"We're off to a good start on the year with 4 percent sales growth, excluding divestitures, on a constant currency basis and adjusted EPS at the high end of our guidance range," said Jim Tobin, president and chief executive of the company.