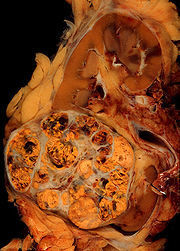 Renal cell carcinoma
Full kidney removal is not always the best treatment for small renal tumors and could lead to chronic kidney disease and increased risk of cardiovascular disease, according to a new clinical guideline issued by the American Urological Association (AUA).

The guideline was released rhis week during the Association's Annual Scientific Meeting in Chicago. This is the first time that the AUA has released official guidance on managing patients with early-stage renal masses.

AUA says that kidney cancer is the most lethal of the commonly diagnosed urologic cancers. Detection of clinical stage 1 (<7.0 cm) renal masses has increased in frequency (more than 50,000 people are diagnosed each year), and is now a common clinical scenario for the practicing urologist.

It was previously believed that all kidney tumors, regardless of size or aggressiveness, were best managed by radical nephrectomy (complete removal of the affected kidney). However, increased strain on the remaining kidney can lead to chronic kidney disease and predispose patients to certain metabolic complications, including an increased risk of cardiovascular events.

In preparing the guideline, the panel assessed the efficacy of the following major treatment modalities:

A laparoscopic approach to radical nephrectomy is now an established standard because it is associated with a more rapid recovery than an open approach.

Partial Nephrectomy: Surgical excision by partial nephrectomy is a reference standard for the management of clinical T1 renal masses, whether for imperative or elective indications, given the importance of renal function and avoidance of chronic kidney disease. In general, open partial nephrectomy is preferred for complex cases.

Thermal Ablation: Thermal ablation (cryoablation or radiofrequency ablation), performed either percutaneously or laparoscopically, is an available treatment option for the patient at high surgical risk who wants active treatment and accepts the need for long-term surveillance. Counseling about thermal ablation should include a balanced discussion of the increased risk of local recurrence when compared to surgical excision, the potential need for reintervention, the lack of well-proven radiographic parameters for success, the potential for difficult surgical salvage if tumor progression is found and the substantial limitations of the current thermal ablation literature.

Larger tumors (>3.5 cm) and those with irregular shape or infiltrative appearance may be associated with increased risk of recurrence when managed with thermal ablation.

Active Surveillance: Active surveillance is a reasonable option for the management of localized renal masses that should be discussed with all patients and should be a primary consideration for patients with decreased life expectancy or extensive comorbidities that would increase the risks of intervention. However, more aggressive or larger tumors (>3 to 4 cm) should be managed in a proactive manner, if possible.

"Kidney tumors can be the most insidious of urologic tumors, and it is of the utmost importance that they be assessed promptly and thoroughly and that the proper treatment be offered," said Steven Campbell, MD, chair of the panel that developed the Guideline. "It is equally important to consider preserving renal function whenever possible," he said.