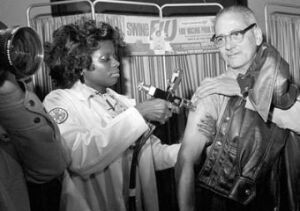 Before production of the swine flu vaccine can begin, the CDC must isolate the H1N1 virus and create a seed stock from which to produce a vaccine in large quantity, as well as test its safety. That scientific work is underway.

Scott Bryan, CDC spokesperson, said in a brief phone interview with DOTmed Friday, "We are at the point of growing the virus for swine flu vaccine manufacture."

However, in regard to production of a swine flu vaccine, Bryan says the
CDC is going ahead with the seasonal flu vaccine manufacture now, and then afterward, making the decision on producing a vaccine for swine flu.

Early reports indicate that, despite fatalities to date, the strain may not be highly virulent.

Federal officials say it would take until January, or late November at the
earliest, to make enough vaccine to protect all Americans from a possible
epidemic of swine flu.

Add to the challenge the considerable dilemma of determining just how much of the world's finite production resources should be devoted to the new vaccine.

Sanofi-Aventis spokeswoman Donna Cary told DOTmed News that for Sanofi, this is not an either/or situation. "We some flexibility as we have a new influenza manufacturing facility coming on line," she says. "For us, one scenario could be to continue to produce seasonal influenza vaccine in one facility and the new H1N1 vaccine in the other."

Even if the CDC requested that Sanofi Pasteur (Sanofi's vaccine arm) make swine flu vaccine in both facilities, there would still be flu vaccine, Cary says.

She notes that "this is the situation for Sanofi Pasteur in the U.S. only. The situation may be different in other countries and for other manufacturers."

Asked to comment on the CDC dilemma, Christopher Olsen, a molecular virologist who studies swine flu at the University of Wisconsin, tells DOTmed that people must put the swine flu breakout into the proper perspective.

"In thinking about the number of cases that have occurred to date with the new strain of virus, it is important to keep in mind that over 30,000 people in the U.S. and hundreds of thousands of people around the world, die every year from routine seasonal human influenza," Dr. Olsen says.

Asked to comment on the severity of swine flu, he says, "I don't believe that we have good genetic signatures to determine relative virulence of [this] influenza virus in people."

Astrid Fiano contributed to this report.