Kidney Stones on the Rise in Kids 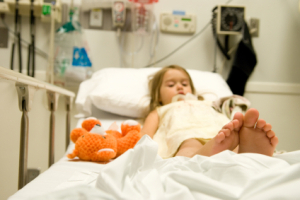 Diet and other factors to blame
When Lisa Garnes received a call from her daughter's daycare center saying that 3-year-old Emma was complaining of back pain, she never dreamed the cause would be a condition often associated with middle aged men: kidney stones.

"They said that Emma was doubled over in pain and saying that her back hurt her," says Garnes.

Garnes took her to the pediatrician, who suggested it was a urinary tract infection. A half hour later, she called again to tell her doctor that her daughter couldn't keep anything down. The doctor suggested taking her to the ER.

After a battery of tests, including an ultrasound, the doctor returned with the news: the child had kidney stones.

Diet is the Culprit

The growing incidence of kidney stones in children can be linked to the modern diet and lifestyle, says Gary Faerber, MD, a urologist at the University of Michigan Health System.

"I am seeing more and more children who have kidney stones," says Faerber. "It's a real phenomenon."

To treat Emma, urologists performed two lithotripsies to break up the stones and performed surgery on a tough one she couldn't pass. Doctors said she had high levels of oxalates (found in many fruits and vegetables) in her system, which required putting her on a low oxalate diet. Oxalates can be found in strawberries, blueberries, raspberries, chocolate, peanut butter and nuts. Doctors also suggested she spike up her water intake.

Typically, kidney stones are found in adults between the ages of 35 and 60 but children can get them, too. A family history of kidney stones is also a significant risk factor.

Children today seem to live a lifestyle that puts them at risk of kidney stones, meaning they consume sugar-filled drinks and a fast-food diet that is high in sodium, a known risk factor in the formation of kidney stones, says Faerber.

"The sedentary lifestyle we're starting to see in the younger age group and the pediatric group is also a risk factor because we know that obesity increases the risk of forming kidney stones," he adds.

The most common kidney stones in the U.S. are calcium oxalate stones.

Recent research has also shown a link between global warming and dehydration. The more dehydrated one becomes, the more concentrated the urine becomes, which forms crystals and crystals form into kidney stones, Faerber adds.

Recent studies in global warming indicate that the number of patients yearly who are treated for kidney stones is going to increase from 1 million to 2 million.

The most common reason people have kidney stones is that the urine becomes super saturated and it doesn't take much for a small crystal to form in the urine. Crystal can grow into stones and get larger and larger as long as they sit in the super saturated fluid. This is why it's really important for kidney stone patients to make sure they keep their urine really diluted, Faerber says.
1(current)
2