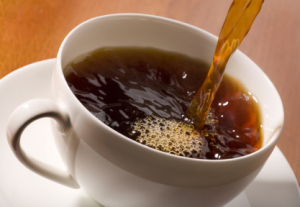 No benefits associated
with regular coffee drinking
Researchers from the University of Vermont College of Medicine and Johns Hopkins School of Medicine looked at brain electrical activity and blood flow during caffeine withdrawal to examine what was actually taking place during a "caffeine withdrawal headache."

The group examined caffeine's effects in a double-blind study. Half of study participants received caffeine capsules and the others got placebo capsules.

Each participant's response to the caffeine or placebo was tallied using three different measures. These were: brain electrical activity via electroencephalogram (EEG); blood flow velocity in the brain via ultrasound; and participants' self-reports of subjective effects via questionnaires.

For example, acute caffeine abstinence increased brain blood flow, which may be the cause of withdrawal headaches, researchers say.

Acute caffeine abstinence also produced changes in EEG (increased theta rhythm), which has previously been linked to the fatigue people who are withdrawing from caffeine often feel.

The researchers also discovered an unexpected finding: that there were no benefits associated with regular caffeine use.

"In addition to looking at caffeine withdrawal, the study's rigorous design also permitted comparison of caffeine maintenance with placebo maintenance," said Stacey Sigmon, Ph.D., research associate professor of psychiatry at the University of Vermont and lead author the study.

"In contrast to what most of us coffee lovers would think, our study showed no difference between when the participant was maintained on placebo and when the participant was stabilized on caffeine. What this means is that consuming caffeine regularly does not appear to produce any net beneficial effects, based on the measures we examined," Sigmon said.