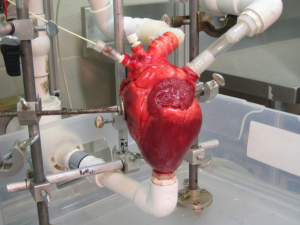 The machine saves researchers time and money by allowing them to test and refine their technologies in a realistic surgical environment, without the cost and time associated with animal or clinical trials.

Currently, most medical device prototypes designed for use in heart surgery are tested on live pigs, which have heart valves that are anatomically similar to human heart valves. However, these tests are both expensive and time-consuming, and involve a lengthy permission process to ensure that the use of live animals is necessary.

So, researchers at NC State have developed a "dynamic heart system,, a machine that pumps fluid through a pig heart so that it functions in a very realistic way. "Researchers can obtain pig hearts from a pork processing facility and use the system to test their prototypes or practice new surgical procedures," says Andrew Richards, a Ph. D. student in mechanical engineering at NC State who designed the heart machine.

By using the machine, researchers can determine if concepts for new surgical tools are viable before evaluating them on live animals. They can also identify and address any functional problems with new technological tools. "There will still be a need for testing in live animal models," says Dr. Greg Buckner, who directed the project, "but this system creates an intermediate stage of testing that did not exist before. It allows researchers to do 'proof of concept' evaluations, and refine the designs, before operating on live animals." Buckner is an associate professor of mechanical and aerospace engineering at NC State.

Using the system could also save researchers a great deal of money. Once the machine is purchased and set up, the cost of running experiments is orders of magnitude less expensive than using live animals.

The Annals of Biomedical Engineering published the research, "A Dynamic Heart System to Facilitate the Development of Mitral Valve Repair Techniques," in late April.