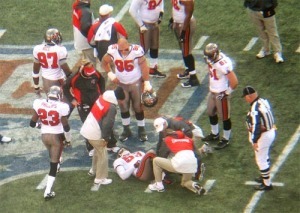 A significant increase
in body mass index (BMI)
for offensive and defensive
linemen has been noted
during the past 30 years
The cardiovascular health of professional football players and those players who aspire to professional status has become the focus of at least one study, which is being published in JAMA on May 27.

A significant increase in body mass index (BMI) for offensive and defensive linemen has been noted during the past 30 years, and body mass index fitting the category of class II obesity, reported in more than a quarter of National Football League (NFL) players in 2003, is another cause for alarm, researchers say.

Just as important, sporadic deaths of active and young retired professional football players have led researchers to investigate whether there's an increase in cardiovascular disease risk among retired NFL players.

The study included 504 active men who are retired NFL players from 12 NFL teams.

Data were compared with men the same age, who were participants of the Coronary Artery Risk Development in Young Adults (CARDIA) study, a group which included 1,959 participants age 23 to 35 years old.

The NFL players were taller and heavier than the CARDIA group. The researchers found that despite their larger size, the NFL group had lower average fasting glucose levels and a significantly lower prevalence of impaired fasting glucose (6.7 percent vs. 15.5 percent) compared with the CARDIA group, perhaps because the athletes continued to exercise strenuously.

However, when push came to shove, there were no significant differences between the athletic and non-athletic males; the prevalence of high total cholesterol, high LDL-C, low HDL-C and high triglyceride levels were the same. It should be noted that the NFL players were less likely to smoke than the non-elite athletes in the CARDIA group (0.1 percent of former NFL players smoked versus 30.5 percent in the CARDIA group).