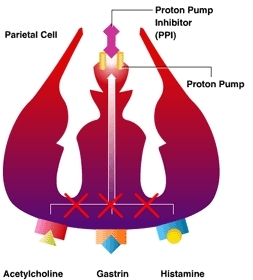 With the introduction of proton-pump inhibitors, used primarily in the treatment of ulcers and gastroesophageal reflux disease, the use of acid-suppressive medications has jumped significantly over the last several years, with estimates that between 40 percent and 70 percent of hospitalized patients receive some form of this medication.

Shoshana J. Herzig, M.D., of Beth Israel Deaconess Medical Center, Boston, and colleagues examined the association between acid-suppressive medication use and hospital-acquired pneumonia. The study included data on patients who were admitted to a large, urban, academic medical center from January 2004 through December 2007, including patients who were at least 18 years of age, hospitalized for 3 or more days, and not admitted to the intensive care unit.

Acid-suppressive medication use was defined as any order for a proton-pump inhibitor or histamine2 receptor antagonist. The study included data on 63,878 hospital admissions.

The researchers write that acid-suppressive medications have been thought to increase the risk of pneumonia via modification of upper gastrointestinal bacteria, and, as a result, respiratory bacteria.

"These results occur in the context of an increasing body of literature suggesting an association between acid-suppressive medication and pneumonia. Further scrutiny is warranted regarding inpatient prescribing practices of these medications," the authors conclude.