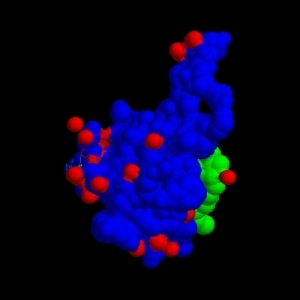 Researchers believe that
insulin and insulin-like
growth factor contribute to
the growth and proliferation
of prostate cancer
Restricting carbohydrates, regardless of weight loss, appears to slow the growth of prostate tumors, according to an animal study being published this week by researchers in the Duke Prostate Center.

"Previous work here and elsewhere has shown that a diet light in carbohydrates could slow tumor growth, but the animals in those studies also lost weight, and because we know that weight loss can restrict the amount of energy feeding tumors, we weren't able to tell just how big an impact the pure carbohydrate restriction was having, until now," said Stephen Freedland, M.D., a urologist in the Duke Prostate Center and lead investigator on this study.

The researchers believe that insulin and insulin-like growth factor contribute to the growth and proliferation of prostate cancer, and that a diet devoid of carbohydrates lowers serum insulin levels in the bodies of the mice, thereby slowing tumor growth, Freedland said.

The findings appear in the May 26, 2009 online edition of the journal Cancer Prevention Research.

"The mice that were fed a no-carbohydrate diet experienced a 40 to 50 percent prolonged survival over the other mice," Freedland said.

Mice on the no-carbohydrate diet consumed more calories in order to keep body weights consistent with mice on the other study arms.

"We found that carbohydrate restriction without energy restriction, or weight loss, does indeed result in tumor growth delay," he said.

The researchers plan to begin recruiting patients at two sites: Duke and UCLA, for a clinical trial to determine if restricting carbohydrate intake in patients with prostate cancer can similarly slow tumor growth. The trial should begin within a few weeks.

"It's very exciting--this is a potential new mechanism to fight prostate cancer growth and help patients live longer with their disease," Freedland said.