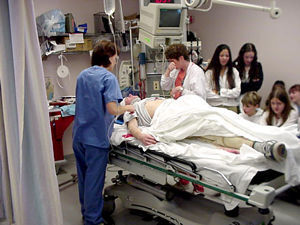 40 to 50 per cent of cases
in the ER are
non-urgent patients
Andre Maddison, a master's student in Canada, wasn't sure what was causing emergency rooms to become overcrowded and chaotic, but contrary to popular belief, he didn't think primary care patients were to blame.

The master's student in Community Health and Epidemiology at Dalhousie University in Halifax, Nova Scotia, investigated this popular misconception and by doing so, became one of two winners of the Canadian Health Services Research Foundation's (CHSRF's) 2009 Mythbusters Award.

Mythbusters is a series run by the CHSRF. Other myths exploded include the common belief that Canadian doctors are leaving for the U.S. in droves and that generic drugs are of lower quality and less safe than brand-name drugs.

"I started with the view that due to a shortage of family doctors, people are going to emergency departments and overcrowding them," explains Maddison. "But in reality, why ER's are overcrowded wasn't known."

While 40 to 50 per cent of cases in the ER are non-urgent patients, Maddison found that primary care patients were not overly burdensome, after speaking to physicians and other personnel.

Rather, he found that patients in need of acute-care, beds, extended stays, specialists and other high demand care are placed into the ER and greately contribute to chaotic conditions there.

"Emergency room overcrowding is a national problem with potentially devastating effects," Maddison says. "It is rooted in insufficient physical and human resources and poor [coordination] within and between hospitals."

He went on to say that to improve care for both urgent and non-urgent patients hospital administrators and doctors must decide what the ER is to be used for.

During the summer, Maddison will work with the CHSRF to polish up his paper before it goes to publication. He hopes it helps people, especially policymakers, to better understand the fundamental problems of hospital overcrowding.