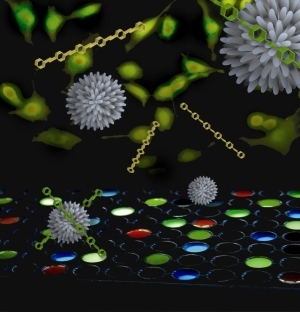 Nanoparticles and polymers
were used to create a sensor
that can distinguish between healthy,
cancerous and metastatic cells
Using a "chemical nose" array of nanoparticles and polymers, researchers at the University of Massachusetts Amherst have developed a fundamentally new, more effective way to differentiate not only between healthy and cancerous cells but also between metastatic and non-metastatic cancer cells. It's a tool that could revolutionize cancer detection and treatment, according to chemist Vincent Rotello and cancer specialist, Joseph Jerry.

Rotello's research team, with colleagues at the Georgia Institute of Technology, designed the new detection system by combining three gold nanoparticles that have special affinity for the surface of chemically abnormal cells, plus a polymer known as PPE, or para-phenyleneethynylene. PPE fluoresces or glows as warning light when displaced from the nanoparticle surface.
1(current)
2