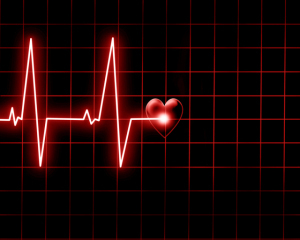 A common ECG finding
may augur trouble
A common electrocardiogram finding that has largely been considered insignificant may actually signal an increased risk of atrial fibrillation, the future need for a permanent pacemaker and an increased risk for premature death.

In their report in the June 24 Journal of the American Medical Association, researchers from Massachusetts General Hospital (MGH) and Boston University School of Medicine describe results of the first large-scale study looking at the significance of a prolonged PR interval on an ECG test.

"Lengthening of the PR interval is commonly seen on routine electrocardiograms, more often in older patients, and has been considered a relatively harmless finding," says Susan Cheng, MD, a cardiology fellow at MGH and Brigham and Women's Hospital, who is lead author of the JAMA paper. "But our results indicate that PR interval prolongation is not as benign as previously thought."

A prolonged PR interval on an ECG test represents a delay in the time it takes for the signal to move across the atria at the top of the heart, which receives blood flowing in from the veins, into the ventricles at the bottom of the heart, which pump blood out into the arteries.

But previous investigations of the impact of PR prolongation were limited to younger, healthy participants, such as members of the military.

The current study analyzed data from more than 7,500 participants in the Framingham Heart Study, followed for more than three decades. Although only 124 of those participants showed a prolonged PR interval on the electrocardiogram taken when they entered the study, PR prolongation proved to be a significant risk factor.

Further prolongation of the PR interval led to even greater risk.

"We do not yet know why a subtle finding such as a prolonged PR interval is associated with such serious adverse outcomes, but it may be a marker for progressive problems with the heart's electrical conduction system," says Thomas Wang, MD, of the MGH Heart Center, the study's senior author. "We need to learn more about how a prolonged PR interval is linked to these serious events and what should be done to prevent them. Right now, clinicians might consider that their patients with PR prolongation may be at increased risk of these problems and follow their electrocardiograms more closely." Wang is an assistant professor of Medicine at Harvard Medical School.