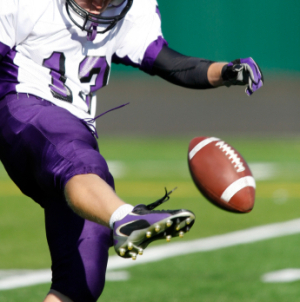 Punting is a dangerous play
Injuries can occur during a sporting competition at any time. However, new research finds that during football, injuries sustained at the beginning or middle of a game are more severe compared to injuries sustained during the end or in overtime. This finding suggests that the changes of intensity throughout competition influence risk of severe injury.

The beginning of a football game accounted for 16 percent of injuries, with 54 percent occurring during the middle of the game. The end of the game or during overtime accounted for 30 percent of injuries, according to the study published in Research in Sports Medicine and conducted by researchers for the Center for Injury Research and Policy (CIRP) in The Research Institute at Nationwide Children's Hospital. This is the first study to assess the effects of competition intensity on injury severity in high school football.

"Not only does the time in competition affect injuries but also the phase of play," one the study's authors, Dawn Comstock, Ph.D, principal investigator in CIRP at Nationwide Children's Hospital says.

The study compared the effects of field location, time of competition and phase of play on injury severity. Not only did researchers find trends in the game time and phase of play, but also that more than three quarters of injuries occurred in the middle of the field.

"Although more injuries occurred in the middle of the field, injury severity and diagnosis varied little by field location," said Comstock, also a faculty member of The Ohio State University College of Medicine. "Overall, severe injuries accounted for 20 percent of all injuries, with 44 percent of severe injuries being fractures."

Data for the study were collected from the 2005-2006 National High School Sports Injury Surveillance Study and were funded in part by the Centers for Disease Control and Prevention.