Avastin Alone and in Combination With Chemotherapy Improves Response, Progression Times and Survival in Brain Cancer 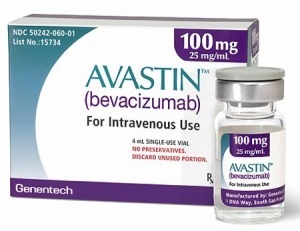 Study shows the apparent
power of Avastin when used
alone in treating deadly brain
cancers for which few effective
treatments now exist
The targeted therapy Avastin, alone and in combination with the chemotherapy drug CPT-11, significantly increased response rates, progression-free survival times and survival rates in patients with a deadly form of brain cancer that had recurred.

Patients with recurrent glioblastoma have a grim prognosis, and conventional treatments were typically limited to largely ineffective and highly toxic chemotherapies. Only about 5 percent of patients respond to further treatment -- meaning their tumors shrink by 50 percent or more. And only 15 to 20 percent of patients make it to the six month mark before their disease progresses again. Survival is limited to six to seven months.

But a randomized Phase II study of Avastin alone and Avastin given with CPT-11 have improved those statistics, dramatically increasing response rates, progression-free survival times and overall survival. Early results from the study prompted the U.S. Food and Drug Administration to agree to an accelerated approval of Avastin in May 2009 for use in patients with recurrent glioblastomas, said Dr. Timothy Cloughesy, director of the Neuro-Oncology Program at UCLA's Jonsson Comprehensive Cancer Center and senior author of the study. The program allows provisional approval of medicines for cancer or other life-threatening diseases.

The study, conducted at 11 centers across the county, was published this week in the early online version of the Journal of Clinical Oncology.

"This is a huge breakthrough for us. In all the years we've been treating recurrent glioblastomas using conventional and investigational agents, we've never had anything like the responses we're seeing with Avastin," said Cloughesy, who also is a professor of neurology. "You just don't get these kinds of responses in this patient population. We're seeing dramatic improvements."

The two-armed study enrolled 167 patients with recurrent glioblastoma. One arm evaluated Avastin used as a single agent, the other Avastin given with CPT-11. An independent radiological facility was used to measure tumor responses, Cloughesy said.

In the Avastin-only arm, 28.2 percent of patients responded to the treatment, meaning their tumors shrank by 50 percent or more, a significant increase from the historic 5 percent response rates. Of the 80 patients, 42.6 percent surpassed the six month mark without their disease progressing, up from the historic 15 to 20 percent of patients. Survival was 9.2 months, a slight increase of the typical six to seven month survival time.
1(current)
2
3