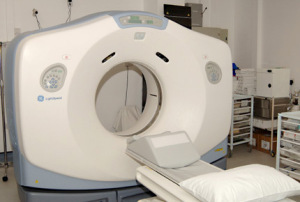 CT scans rival SPECT
in diagnostic imaging of
coronary artery disease
CT scans measure up to SPECT in examining heart health while also allowing doctors to detect signs of coronary artery disease, according to an article published in the Journal of the American College of Cardiology last week.

The researchers found that CT scans were able to detect blood-flow problems in the heart as well as SPECT does, while also revealing potentially dangerous narrowing of the arteries.

In the experiments, doctors at Massachusetts General Hospital ran stress tests, or myocardial perfusion studies, on volunteers to determine how healthy their hearts were. First, doctors gave volunteers adenosine -- a chemical that can excite the heart -- and then they imaged the heart and coronary arteries with both SPECT and CT scanners.

"Cardiac CT was able to detect perfusion defects similar to SPECT, but also had the great advantage of having all the information in the coronary anatomy, which compared very favorably to cardiac cath[eterization]," Ricardo Cury, MD, the director of cardiac MRI and CT imaging at the Baptist Cardiac & Vascular Institute in Miami, Fl, and lead author of the study, told DOTmed News.

Dr. Cury also found that CT tests were better than SPECT at detecting stenosis, a narrowing of the arteries that can impede blood flow, although he cautions that the results of this finding were not statistically significant.

Radiation levels of the two treatments were similar, at around 12.7 mSv. "The CT protocol included three scans and probably one scan can be dropped in the future," Dr. Cury added, "further reducing even more the radiation dose of CT."

Using this protocol, Dr. Cury believes physicians will be able to get accurate imaging of cardiovascular health without exposing patients to high levels of radiation. Physicians can first perform low-radiation (1-3 mSv) preliminary scans to look for coronary artery blockages. And then only if these are discovered, will the doctors order a stress CT scan to see if the blockage truly impacts blood flow.