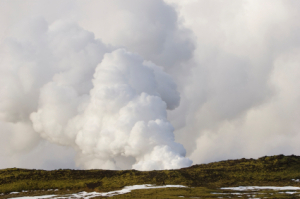 "For most of our business partners it is a big nuisance," said Wolfgang Zeller, general manager of DOTmed's European operations. "Some of them tried to get ship's passage, just to learn that they were all sold out, double overbooked. But soon things should be back to normal as airlines are working to clear the legions of stranded passengers."

Global software leader ContextVision reported that their software license business proceeded as usual despite some DHL rerouting via truck transport.

"Our chief problem was employee travel: Our CEO and the Asian sales manager, both based out of our Stockholm office, were stranded in China," said Peter Kovamees, ContextVision's marketing manager. "Additionally, some regular travel between our U.S. and Swedish offices has been postponed due to the volcano ash."

Meanwhile, in Denmark..."The volcano in Iceland has had some impact on our business but luckily it has not caused us any direct financial loss," noted Epoka Medic Mission's Logistics Manager Morten Rousing. "The impact can mainly be seen in imports from the U.S. being delayed." Fortunately their business impact may be minimal. "We are glad for our good relations with our customers who are understanding in this situation and we have not lost any customers due to the volcano." Like many firms, Rousing confirmed that Epoka technicians were unable to reach their service destinations.

This has been an issue for U.S.-based firms, too.

"I have a customer in London desperately waiting for my tech to fly there and service two mammo systems," reported Abe Sokol of Absolute Medical Equipment, Wesley Hills, N.Y.

But personnel logistics were also compounded by equipment and parts shipping problems. "We have several crates and packages which were supposed to be shipped to European customers via airfreight and have been stuck at JFK Airport in New York," said Ari Laufer, President, Alaka Medical Systems, Inc., which does business in Germany, England, Belgium, Ukraine, Italy, and Greece. "We have been unable to ship any medical equipment or parts orders to Europe since last week."

Laufer explained that freight forwarders explored all options such as overland routes. "However we came to the conclusion that because of the chaotic situation there was a good chance that shipments would get lost and delayed in transit via overloaded truck and rail services. In our many years of business we have never experienced such a disruption in our shipping schedules, so we consider this a freak occurrence which hopefully will not happen again in many years. You can't plan for something like this, and our European customers are being very patient," he said.

Despite all the lingering problems, does the volcano cloud have a silver lining?

"This increases the willingness to improve videoconferencing capabilities and usage for certain meetings. Although customer meetings will continue to be face to face, virtual meetings may be increasingly used for internal discussions. This outcome has the potential to positively impact the environment, as well as save time and money," ContextVision's Kovamees said of the lasting impact of the crisis.

Feel free to add your own horror stories, coping strategies, and updates below.