Surgery can be safe even in war-torn regions

Surgery can be safe even in war-torn regions 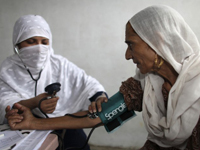 A report in Archives of Surgery examining almost a decade of surgeries performed by the international medical organization in poor countries amid earthquakes and civil war found an operative mortality rate of 0.2 percent, or about one out of 500 operations.

Emergency procedures, those to heal violent traumas and ones performed during periods of conflict had higher mortality rates, but still lower than found in earlier studies, the researchers said.

"Just because you work in a conflict, doesn't mean every other person on your operating table is going to die," Dr. Kathryn M. Chu, the South Africa-based surgical ambassador for the organization and lead author of the study, told DOTmed News.

The research contradicts previous studies that found mortality rates during operations as high as 5 to 10 percent in some poor areas, according to the study. The high death rates prompted the World Health Organization to institute the Safe Surgery Saves Lives checklist in 2007.

The current study looked at thousands of surgeries performed in 17 programs across 13 countries from 2001 to 2008. Of the nearly 19,600 surgeries, there were 31 deaths, Chu said.

Hysterectomies, abdominal surgery, and treatments for violent trauma were associated with the greatest relative number of deaths, according to the study.

The highest mortality rate, of around 1 percent, was found at the Masisi Hospital in the Eastern Congo between 2007 and 2008. The region sees constant fighting between rebel forces and the military, so many of the patients taken to the hospital have serious injuries, Chu said.

Chu credits the relatively low death rates at Doctors Without Borders' health sites with the organization's adherence to "low-tech" minimum safety standards, such as anesthesia monitoring and post-op recovery rooms.

"Low mortality rates can be achieved even in resource–poor settings. Our study demonstrates that surgery can be safe anywhere in the world," she said.

In their report, Chu and her co-authors call the WHO's 2007 checklist "an important first step" in initiating quality improvement programs around the world. The checklist reminds surgeons and staff to use pulse oximeters, check for patient allergies, get patient consent and perform other basic safety routines.

Use of the checklist brought inpatient deaths down from 1.5 percent to 0.8 percent at eight hospitals worldwide during a pilot study, according to a 2009 New England Journal of Medicine article.