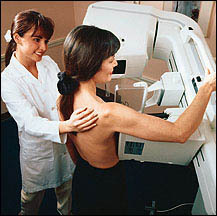 The California State Legislature approved a bill last week that would avert cuts to the state's mammogram program, Every Woman Counts, a program aimed toward low-income, uninsured or poorly insured women.

The bill, awaiting Gov. Arnold Schwarzenegger's approval, will restore access to mammogram screening for 100,000 low-income, uninsured women. More than 1.2 million California women are eligible for the program, which kicked off in 1994.

"Poverty should not be a death sentence," said Noreen Evans (D-Santa Rosa), who authored the bill, in prepared remarks. "By passing this bill in a rare show of bi-partisan unanimity, the legislature is restoring hope to thousands of women who will face needless suffering and unconscionable death from treatable cancer. Mammograms save lives."

The bill is sponsored by Susan G. Komen for the Cure and the American Congress of Obstetricians and Gynecologists and funded by tobacco taxes and federal money.

In January, the state's Department of Public Health implemented two changes to the program's eligibility without advance notice: the minimum age to receive breast cancer screening services was raised from 40 to 50 and new enrollment was frozen for six months. The bill requests $21.1 million from the general fund to reinstate the program to the way it was, says Donna Sanderson, founder of the Komen for a Cure statewide collaborative in California and executive director for the organization's Sacramento branch.

"What bothers me," Sanderson says, "is these arbitrary age lines. If a woman finds a lump, it doesn't matter if she is 16 or 69. She should be screened."

The bill on the table, AB 1640, will require the Department of Public Health to notify the legislature and program providers of any policy changes to the program 90 days in advance and require the department to report on the program's effectiveness every year. It is also designed to work with the state budget to restore the money needed to provide screening to women ages 40 and older, thereby restoring services for 100,000 women.

The program largely targets minority women in California. From 2003 to 2008, Hispanic women made up 68.7 percent of women receiving the program's services, 15 percent were Asian-Pacific-Islander, 9 percent were white and 2.5 percent were black.