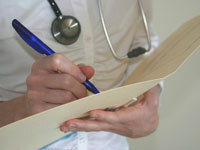 One British doctor argues that wrong diagnoses are a huge threat to patient safety and that doctors need better facilities and sufficient time to make correct diagnoses, according to a paper published Thursday in the British Medical Journal.

In a Personal View article for the journal, Dr. Gordon Caldwell, a consultant physician at Worthing Hospital in Western Sussex, argued that insufficient time to diagnose a patient properly can affect a patient's chance of survival.

In most cases, when a patient is admitted to a hospital, doctors formulate a working diagnosis, which they will treat until a diagnosis is made.

A working diagnosis is reached based on numerous factors, including interviewing and examining the patient, notes, referral letters, drug lists, test results and the time course of the illness, according to the article.

"The time taken to reach the correct diagnosis may critically impact on the patient's chances of survival," Caldwell wrote. "Over my career, I have seen many errors in the working diagnosis causing harm and even death to patients."

"Serious errors in working diagnoses made among patients under my care occurred because the old medical notes were unavailable or very [disorganized]; it was difficult to see important blood test results at the same time as hearing the history from the junior doctor; an old electrocardiograph was not easy to find; or there was too much pressure to get the round done and to get patients out of hospital," wrote Caldwell.

To address these problems, Caldwell and his team have used a "considerative checklist" to reduce the chances of pulmonary embolism, septicemia from methicillin-resistant Staphylococcus aureus, and diarrhea from Clostridium difficile. In some cases, pulmonary embolism can be misdiagnosed as bronchopneumonia, which requires a completely different treatment, said Caldwell.

In his paper, Caldwell recommends designing physician workspace and information systems to maximize doctors' ability to see, understand and deliberate on the information needed for a more accurate diagnosis.

"We must urgently consider how to provide rooms, time and information for doctors to do the most difficult part of their job and the part most prone to error: the clinical thinking in making the working diagnosis and treatment plan," he wrote.

And a 1997 study from the National Patient Safety Foundation found that 40 percent of those surveyed reported a misdiagnosis or treatment error. Respondents also reported that their doctor did not make an adequate diagnosis in 9 percent of cases.

When it comes to the intensive care unit or emergency department, misdiagnosis rates may be higher because of the time-critical and serious nature of the diagnosis. These rates range from 20 to 40 percent, according to WrongDiagnosis.com.