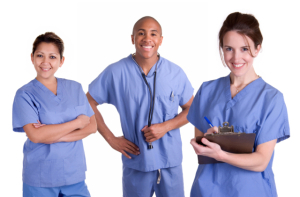 The force is
getting younger and
more diverse.
The United States, which is facing a workforce shortage in the health care industry, has more licensed registered nurses than ever, according to a Health Resources and Services Administration survey released Thursday. The number - about 3.1 million - is a 5.3 percent increase since the group's 2004 survey.

In addition to growing, the workforce is also diversifying and becoming younger, the report found.

This is the first time in three years that the youngest population of nurses grew - an important move in replenishing the RN pool. The survey also recognized that the biggest challenge to restocking the nursing pool is a shortage of nursing faculty to meet the growing need.

"The growth in the numbers and diversity of registered nurses is a positive sign of moving in the right direction," said Mary Wakefield, HRSA's administrator, in prepared remarks. "HRSA has distributed a significant increase of funds over the past year to recruit, educate and retain nurses."

HRSA also reported that the shortage of nursing faculty, which educates future nurses, will grow "significantly" in the near future with 60 percent of current faculty aged 50 and older.

Although the industry still faces a shortage, these findings are promising, said Cheryl Peterson, the director of nursing practice and policy for the American Nurses Association.

"It shows that we continue to add to the number of nurses we have," she told DOTmed News. "It shows we continue to grow as a profession, and the challenges are [that] we have a huge demand we still need to meet. Whether we will be able to meet that or not is a big question."