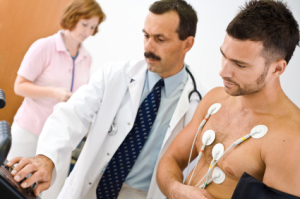 Source: Cardiac Science
Italian researchers argue that electrocardiographic screening of athletes could save lives by detecting "silent" heart problems. The editorial was published Thursday in the British Medical Journal.

The pro ECG stance is based on an Italian study, where ECG screenings for athletes have been mandatory for the past 30 years. The study reported that incidence of sudden deaths before and after the implementation of the program fell by 89 percent, and no deaths were reported among athletes disqualified from competition because of hypertrophic cardiomyopathy, a leading cause of sudden cardiac arrest.

The researchers also point out that the European Society of Cardiology has supported ECG screenings for athletes since 2005, and the International Olympic Committee endorsed a similar approach in 2009.

Researchers Antonio Pelliccia and Domenico Corrado wrote in their editorial that the Italian study supports "the idea that timely identification of affected athletes offers the possibility to improve survival."

The Italian study showed that the decrease in deaths among young athletes coincided with the implementation of mandatory screening. Further, the reduced incidence of sudden death was largely attributed to fewer deaths from cardiomyopathies and was paralleled by the increase in young athletes identified with cardiomyopathies and disqualified from competition during the same period.

The strength of the Italian study, argue Pelliccia and Corrado, is based on the reliability of the pathological data; the heart of each person who died suddenly was examined by experienced cardiovascular pathologists according to standard protocol.

When it comes to the issue of cost versus benefit, Pelliccia and Corrado, cite a study that found ECG screening is more cost-effective than relying on history and physical exam alone. The study calculated that adding ECG to history and physical exams saved 2.1 life years per 1,000 athletes screened, and adding ECG cost $42,000 per life year saved.

But not everyone is on board with mandatory ECG screenings.

In an opposing editorial, Dr. Roald Bahr argues that the diagnostic accuracy of screening varies, and that false positives can be as high as 40 percent. Further, some conditions that can be deadly, such as coronary atherosclerosis, can remain undetected.

"Screening of hundreds of thousands of athletes to save possibly one life a year cannot be justified," he wrote.