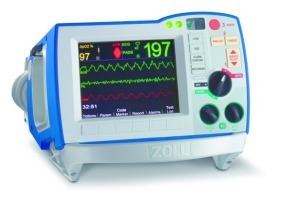 The shock and surprise experienced by bystanders as someone goes into sudden cardiac arrest only makes it harder to administer cardiopulmonary resuscitation. But manufacturers have taken the shock factor into consideration when they developed the newest technology in automated external defibrillators. The technology offers not only audible prompts, but visual display screens and videos that walk a rescuer through the CPR and resuscitation process step by step.

"[Video] overcomes the issues of comprehension and processing during a very stressful time," says Dr. Glenn Laub, co-founder and CEO of Defibtech, a defibrillator OEM. "If someone talks to you while you're trying to save a life, it can be extremely stressful."

Defibrillators are lifesavers when it comes to SCA - the leading cause of death in the United States, accounting for 325,000 deaths every year, according to the Heart Rhythm Foundation.

"To date, nothing can restart a stopped heart except an electric shock. When a person suffers SCA, for each minute that passes without defibrillation, [his or her] chance of survival decreases by 7 to 10 percent," according to the website for the American Heart Association.

Industry professionals say one of the biggest challenges in the defibrillator industry is trying to make the public aware of how deadly SCA can be and how defibrillators are crucial to saving lives.

In order to address the small window of time - three to five minutes - in which a person can be saved from SCA, these technologies deliver step-by-step instructions and feedback - whether a person is compressing too softly or slowly - for AEDs.

"The technology has gotten easier to use," says Ben Wellons, president and co-founder of eMed America Inc., a distributer of new and refurbished defibrillators. "There is CPR coaching tied in with defibrillators now."

Personal instructor
What seems to be the most common trend in the defibrillator industry is the push to make the devices more accessible to a broader group.

More than 10 years ago, Zoll Medical Corporation introduced the visual display screen to the AED market. The device had both audible and visual prompts.

"We've led the market in many ways," says Ward Hamilton, the OEM's senior vice president and vice president of sales. "We were kind of like the ugly duckling when we came out with [the visual screen] in 1999, but now, you can't talk to anybody about defibrillators unless it's about how it helps do CPR."
1(current)
2
3
4
5
6