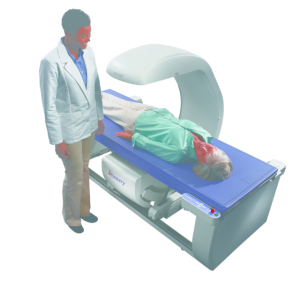 Only a few years ago, the bone densitometry industry was in bad shape. Doctors faced steep Medicare reimbursement cuts and patients had limited access to bone-density tests. But now, the market might be bouncing back with increased reimbursement and recommendations that expand the patient population for osteoporosis screening.

Fortifying CMS reimbursement
Those outside the industry may be surprised to learn that the total annual cost of fall injuries is expected to swell to almost $60 billion by 2020, according to the Centers for Disease Control and Prevention. That statistic is in contrast to a history of conservative Medicare reimbursement for bone mineral density testing, otherwise known as dual-energy X-ray absorptiometry (DXA). The cuts in question began rolling out as a part of the CMS Physician Fee Schedule just four years ago. A test in a non-hospital setting that might have been reimbursed at $140 in 2006 has seen that amount dwindle down to about $40 in 2010.

These dismal numbers have been adjusted thanks to a two-year reprieve by Congress as a part of the Affordable Care Act signed into law last year. To physicians’ relief, Medicare reimbursement is now back up to about $100 per study and has been made retroactive for claims filed in 2010.

Assumptions about utilization
What caused the drastic cuts were concerns over the explosive growth of DXA scans, according to Dr. Andrew Laster, immediate past president of the International Society for Clinical Densitometry and a working physician for Arthritis and Osteoporosis Consultants of the Carolinas based in Charlotte, N.C.

“CMS reviews those fees every five years and they identified on the last review a significant increase in the number of DXA claims they were receiving,” says Laster. “When they compared 1994 to 2004 they saw an increase from about 75,000 studies to roughly 2.5 million, both hospital and non-hospital.”

In recent years, Medicare has cracked down on what the agency deemed as misuse or overuse of complex imaging services, including CT and MRI scans, by slashing reimbursement for those procedures.

“Even though the number of DXA studies appears to have increased, it still represents a small fraction of the people that need to be tested,” says Laster. “When one looks at the numbers, about 13.3 percent of eligible Medicare beneficiaries have had a DXA study done in one year. This was not an issue of overuse, but growth promoted in part by the government.”
1(current)
2
3
4
5

Read more stories from the May 2011 issue