Mammography linked with better outcomes for women in their 40s: study 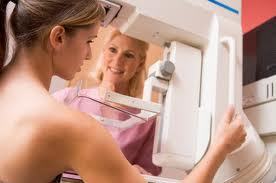 More women in their forties are having their breast cancers picked up by mammograms, and this is linked with less aggressive treatment and a lower risk of relapse and cancer-related death, according to a new prospective cohort study at a Seattle hospital. The trend towards mammography-detected cancers, and away from finding the cancer due to patient complaints or during an unrelated doctor visit, also coincided with finding the disease at an earlier stage, the study said.

Much of the debate around mammography screening centers on whether younger women ought to be screened. For instance, controversial 2009 guidelines from the U.S. Preventive Services Task Force argued women at normal risk for the disease should only get screened starting in their fifties. While the new study, published in the current issue of the journal Radiology, doesn't compare screened versus nonscreened populations, it does suggest that the earlier scans might be doing women some good.

"Our prospective study empowers physicians and patients with data demonstrating the reduction in morbidity associated with (mammography-detected) breast cancer in the 40-49-year age group," write the authors. The corresponding author, Judith Malmgren, is an epidemiologist with the University of Washington and the president of HealthStat Consulting.

The study, run at Seattle's Swedish Medical Center, tracked 1,977 women with breast cancer, aged 40 to 49, between 1990 and 2008. Over that 18-year period, the proportion of cancers detected by mammography increased from 28 percent to more than half of all cases, the researchers said. Meanwhile, the number of cancers found after a patient showed up complaining of symptoms or otherwise found by the doctor declined, the researchers said.

Women in the mammography-detected group often had cancers discovered at an earlier stage, with 83 percent of the stage 0 cases found in this group. Most of these early-stage lesions were ductal carcinoma in situ, a non-invasive cancer which "may not always hold a mortal threat of disease if untreated at an early stage," the authors said. However, even when excluding these cases, mammography-detected women had less aggressive treatment and better survival rates in the study, the authors said.