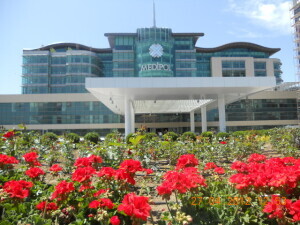 Medipol University Hospital (Credit: Philips)
Royal Philips Electronics said Thursday it inked a 13 million euro ($17 million) deal to install equipment, including a SPECT-CT scanner and an MRI-HIFU device, in a new 500-bed Turkish hospital. The Dutch electronics giant hailed the deal with Istanbul-based Medipol University Hospital as the biggest of its kind for any single hospital in Turkey.

As part of the package, Philips will install a BrightView XCT, a SPECT-CT scanner, and the Sonalleve MR-HIFU system, which uses MRI-guided high intensity focused ultrasound to blast uterine fibroids.

"Philips is delighted that by working closely with Medipol Hospital throughout the realization of this major project, we were able to create a customized package designed to help them develop a truly A-class facility for their patients," Kevin Haydon, Philips Healthcare's general manager of global sales and service international, said in a statement.