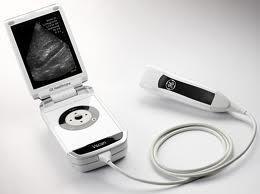 The original Vscan(Credit: GE)
GE Healthcare's cell-phone-sized ultrasound scanner, the Vscan, is getting an upgrade. On May 10, the company released version 1.2, featuring what it says is an improved user interface, longer battery life and software updates.

The Waukesha, Wis.-based company said the changes to the two-year-old device are based on feedback from users.

"We have been constantly interacting with customers to learn about how they have been using Vscan and what are some of the needs they have for improvement," Agnes Berzsenyi, GE's general manager of global primary care ultrasound, told DOTmed News.

Launched in February 2010 in time for the Winter Olympics, Vscan was touted as the "stethoscope for the 21st century" as it aimed to make ultrasound easier to use and more accessible at the bedside. It has also been making inroads in poorer countries, where it could help doctors working in rural communities who find it hard to get, or maintain, traditional ultrasound systems. Since its launch, "several thousand" Vscans have been sold worldwide, Berzsenyi said.

For version 1.2, Berzsenyi said the company simplified the one-pound device's interface and implemented what she calls "fingertip" control, meaning doctors can now operate the device's buttons by brushing them with their fingers, instead of having to press them down. The battery life has also been extended. Before, a fully charged battery allowed one hour of continuous scan time, but now it lasts 50 percent longer, Berzsenyi said.

GE tweaked the software, too. On the program that runs on physicians' PCs, doctors can now create a pdf export of images, Berzsenyi said. The company also updated the customer support and training website.

Unlike larger traditional ultrasounds, Vscans do not need to be activated by a GE field engineer, and the company said it has also made it easier for doctors to set up their newly bought systems on their own, according to Arvind Gopalratnam, a GE spokesman.

Berzsenyi said the pricing is nearly the same as the earlier version, which has been reported at around $7,900. However, the device now comes with a standard 3-year warranty, unlike the previous iteration's 1-year warranty.

In addition to getting an upgrade, the device has also become available in more countries. In March, it came out in Mexico, while it was released in China and other parts of Latin America last year.

As for whether they'll be a version 1.3, the company wouldn't say. But GE said it will keep listening to its users.

"We're always looking at ways to take in customer feedback," Gopalratnam said. "As 1.2 gets out there in the marketplace, we'll see what customers have to say."