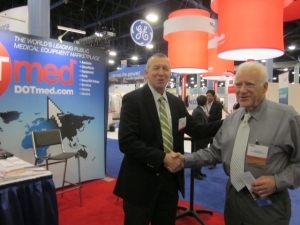 DOTmed's Ron Minor
with a guest at our
SNM 2012 booth.
I came back yesterday from an enjoyable two-day trip to SNM's 2012 annual meeting in Miami Beach, Fla., which started Saturday and ends today.

There's always a lot of energy at good trade shows, but this one had the most energy of all the shows I've been to recently.

You might have noticed that SNM has a new name: it's now the Society of Nuclear Medicine and Molecular Imaging. The field is expanding.

One topic that a lot of people were interested in was amyloid imaging, which has the potential to become a big thing for the industry.

In April, as many of you know, Amyvid, an Eli Lilly drug, became the first PET imaging agent approved by the FDA to help doctors measure beta-amyloid deposits in the brains of living patients. The deposits are associated with the development of Alzheimer's disease.

While not everyone is convinced, PET amyloid scans might help doctors better manage the disease, either by helping them rule out the presence of Alzheimer's in their patients or by assisting researchers in developing new therapies.

Although Amyvid is the first, it probably won't be the last PET amyloid agent to hit the market. At SNM this year, evidence was shared on several rival agents, including GE Healthcare's Flutemetamol 18F and Piramal Imaging's florbetaben.

Loren Bonner, a DOTmed News reporter who attended the show, has a story on these developments. I hope you have a chance to read it.

On a personal note, I was disappointed I didn't get a chance to see my old friend Wayne Webster, who broke his knee. An SNM meeting without Wayne is like a peanut butter and jelly sandwich without the peanut butter.