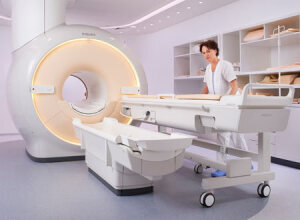 Philips' MR-HIFU system
(Image courtesy Philips)
Royal Philips Electronics and Celsion Corp. said Tuesday that the Food and Drug Administration has given them the nod to start phase 2 trials on a heat-activated cancer drug and a heat-generating acoustic device that the companies say can work together to better target bone metastases.

"This multi-modality approach could be transformative for the treatment of a number of cancers," Falko Busse, vice president and general manager of MR Therapy for Philips, said in a statement.

The idea behind the combination therapy is to keep the drug active only in the area around the malignancy but inactive elsewhere in the body. Theoretically, this could help improve effectiveness and minimize side effects.

For this combo therapy, the selective activation of Thermodox is accomplished with ultrasound-generated heat.

Once injected into the body, Thermodox is largely dormant until heated up to around 103 to 107.6 degrees Fahrenheit, according to Celsion. Getting the cancer site hot enough for Thermodox to work is where the MR-HIFU system comes in. This uses MR imaging to guide blasts of acoustic energy to raise the temperature of the area surrounding the metastases, causing the drug to deliver its cancer-killing payload.

For the phase 2 trials, the companies are investigating the use of Thermodox to relieve pain in patients with late-stage breast, lung or prostate cancers, in which the disease has spread to the bone. Philips said the trial would start in the second half of the year.

According to the study's clinicaltrials.gov page, Celsion expects to enroll an estimated 52 patients in the study.

About 300,000 to 500,000 patients suffer from painful bone metastases caused by breast, lung and prostate cancer every year in the United States, the companies said. These patients are usually treated with opiates and other pain-killers or radiation therapy.

Thermodox is also being studied to treat other cancers. Results from a 700-patient trial on its efficacy for primary liver cancer, known as the HEAT Study, are expected by the end of the year, Philips and Celsion said.

Philips' MR-HIFU system was first commercially released in early 2010 in Europe to treat uterine fibroids, according to the Focused Ultrasound Foundation.

The system is not not available in the U.S. yet, but a Philips spokesman told DOTmed News by e-mail that the company was enrolling patients for a phase 3 trial on uterine fibroids that it hopes to wrap up in two years, and which would be the basis for an FDA submission.