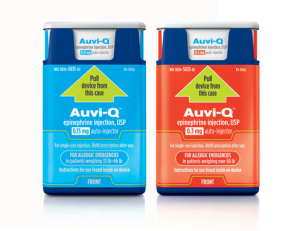 Auvi-Q (Credit: Sanofi)
The Food and Drug Administration has approved a cell phone-sized injector that gives verbal instructions to patients who need to dose themselves with epinephrine to ward off a severe allergic reaction, drug maker Sanofi announced Monday.

The device features visual cues and context-sensitive voice recordings that give step-by-step instructions on how to inject the drug. According to a video demonstration of the product, it tells patients experiencing shock to jab the device into their thigh and wait five seconds until the drug is released. It then urges them to seek medical attention.

The Auvi-Q was developed by Intelliject Inc., a privately held company in Richmond, Va., but Sanofi holds the North American manufacturing and distribution rights.

About 6 million Americans are at risk for anaphylaxis, with allergies to dairy, nuts, shellfish and other food the most common trigger, according to an Intelliject press release.