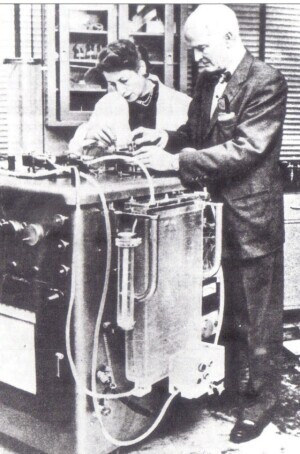 From the September 2012 issue of HealthCare Business News magazine

Born September 29, 1903, in Philadelphia, Pa., John Heysham Gibbon Jr. hailed from several generations of physicians and kept the tradition unbroken when he too became one. But even in such illustrious company, Gibbon would set himself apart by not only inventing the heart-lung machine (also known as the pump oxygenator), but also by pioneering the first successful open-heart bypass surgery.

It was an unfortunate run-in with a young woman with a blood clot in her lungs that first propelled Gibbons into the medical history books. In 1931, during his Harvard research fellowship, Gibbon worked with a team whom performed emergency surgery on the woman. When this effort resulted in her death, a frustrated Gibbon envisioned an artificial device for bypassing the heart and lungs, allowing for more sufficient heart surgery techniques. He reckoned many patients’ lives could be spared if blood remained oxygenated during lung procedures.

It seemed, though, that the cards were stacked against Gibbon. For one, he had no engineering background. And wet blankets were thrown over his innovative idea left and right. Despite all this, he continued to push his invention, and his persistence paid off. In 1935, to everyone’s astonishment, Gibbon was able to keep a cat alive for 26 minutes with a prototype heart-lung bypass machine. He continued experimenting on cats and dogs, until taking a leave of absence from his promising research to enlist in the World War II army service in the China-Burma-India Theater.

Upon his return in 1946, Gibbon resumed his research, becoming a faculty member at Jefferson Medical College of Philadelphia. His timing was impeccable, as it wasn’t long until he had the fortune of bumping into none other than Thomas Watson, the CEO of International Business Machines (IBM), a company that hadn’t yet become a household name. Watson was trained as an engineer and completely game for the heart-lung machine project. He promptly threw cash at the project and sent five IBM technicians to work with Gibbon.

When trialed on dogs, the team’s first milestone was an improved machine that incurred a 10 percent mortality rate, and in 1945, Clarence Dennis, another pioneering surgeon and inventor, built a modified Gibbon pump. This model had major drawbacks though — it was tough to clean and caused infections.

The technology finally reached human testing phase when Swedish physician, Viking Olov Bjork, invented an oxygenator with “multiple screen discs that rotated slowly in a shaft, over which a film of blood was injected; oxygen was passed over the rotating discs and provided sufficient oxygenation for an adult human.” Thus, Model I was born and tested on a 15-month-old baby girl with severe heart failure. She did not survive the procedure due to an unexpected congenital heart defect, so the team retired back to the drawing board. After more trial and error, they were able to develop the Model II, keeping 12 dogs alive for more than an hour during heart operations.

The second human trial occurred in 1953 with 18-year-old Cecelia Bavolek as the subject. Her heart and lungs were stopped for 26 of the surgery’s 45 minutes, while her atrial septal defect was repaired. Fortunately, the surgery was a complete success and the team went on to develop an improved Model III in 1954.

Gibbon remained chief of surgery at Jefferson Medical College, wrote the standard textbook on chest surgery and collected a multitude of awards over his lifetime, including: the Lasker Award, Gairdner Foundation International Award, Distinguished Service Awards from both the International Society of Surgery and the Pennsylvania Medical Society, the American Heart Association’s Research Achievement Award, and election into the American Academy of Arts and Sciences. Gibbon was also named an honorary fellow of the Royal College of Surgeons.

Ironically, Gibbon’s own demise was met due to heart trouble. While playing tennis on February 5, 1973, he succumbed to a massive myocardial infarction.

The positive and negative of my COVID-19 testing experience