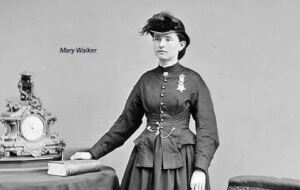 She was the youngest of five daughters born to Alvah and Vesta Whitcomb Walker. All of the daughters were encouraged to obtain higher educations, and while her sisters went on to become teachers, Mary took a different route by enrolling in Syracuse Medical College in her late teens. By 1855, she had her medical degree.

She started a private practice in Columbus, Ohio, before deciding to return home to Oswego. There, she married Dr. Albert Miller and then moved with him to Rome, N.Y. A few years later, the Civil War began and Walker traveled to Washington, D.C., where she attempted to join the Union as a commissioned medical officer. Her request was rejected, so she volunteered to serve as a nurse. She served as a nurse for a short time, halted her nursing to earn a degree from the New York Hygeio-Therapeutic College in New York City and then headed to Virginia to care for the wounded in tent hospitals erected on the battlefields in Warrenton and Fredericksburg, Va. In 1863, she became a surgeon for an Ohio regiment. By late 1864, she added “former prisoner of war” to her biography.

War Department records show that Walker was a Union spy. It’s unclear if she allowed herself to be captured in order to gather more information, but the fact holds that she was captured in 1864 and held as a prisoner in Richmond, Va., for about four months. She was released in August of that year, via a prisoner exchange. By September, she was named the acting assistant surgeon for the Ohio 52nd Infantry. In that role, she served as a supervisor for a hospital tending women prisoners.

After the war, due to her perseverance and determination to obtain an Army commission, she was awarded the Medal of Honor. She became the first woman – and to date, the only woman – to receive the Medal of Honor. The citation stated, in part, that Walker had “rendered valuable service to the Government and her efforts have been earnest and untiring in a variety of ways . . . and has devoted herself with much patriotic zeal to the sick and wounded soldiers, both in the field and hospitals, to the detriment of her own health, and has also endured hardships as a prisoner of war four months in a Southern prison while acting as contract surgeon.”

The Civil War wasn’t the only battle Walker found herself in the center of. She was also an indefatigable advocate for women’s rights, most notably dress reform and women’s suffrage. Of the former, she was arrested more than once and charged with impersonating a man for dressing in men’s clothes, including top hats and trousers, but she persisted.

She died in 1919, two years after her Medal of Honor recognition was rescinded. It should be noted, however, that she had refused to return the medal and wore it every day of her life. In 1977, President Jimmy Carter restored her name to the roll of honorees after a Congressional committee reviewed her contributions to the war effort.