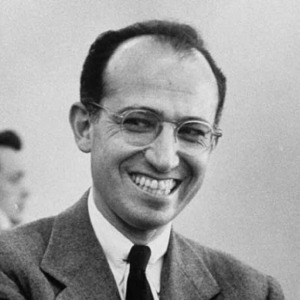 Jonas Salk was born on Oct. 28, 1914, in New York City and while this month celebrates his birthday, it was the gift he gave in 1955 that made him a household name.

Salk grew up poor. His father, born in New Jersey, worked in the garment district and his mother had emigrated from Russia at 12. Although, or maybe because, his parents didn’t have strong formal educations, they held schooling in high regard. Their support helped Jonas and his brothers Lee and Herman to all become doctors. And while Lee became a well-known child psychologist, it was Jonas who would make the biggest mark on medical history.

The three boys grew up in a time when polio epidemics would occur with frequency. The disease has been around as far back as recorded history, with even Egyptian hieroglyphics likely detailing its crippling impact. By the late 19th century it regularly reached epidemic proportions, killing or paralyzing more than half a million people every year during its peak in the 1940s and 1950s.

Salk attended the City College of New York and received a bachelor’s of science. From there, he attended New York University, obtaining his M.D. in 1939, before going on to intern at Mount Sinai Hospital, and then earning a fellowship to the University of Michigan. It was at UM that he focused on studying flu viruses.

Still, polio was a scourge and Salk’s education matched well with what was needed to find a cure. When he took a position at the University of Pittsburgh, he began studying polio. For Salk, the situation was much different than what America has seen with epidemics of the last few decades. Even AIDS never reached the across-the-board support to find a cure. In part, it may be because of the victims – often children and the visual confirmation of the disease with leg braces, crutches and iron lungs for some of the afflicted.

It was in this environment that Salk did his research, and the research he and his colleagues pursued was funded by the public and the government, with money raised through donations by more than 80 million people. Some donations were from people who could only afford to donate change (giving birth to The March of Dimes), but the donations still increased investment in the research and eventual rollout of the vaccine, from $3 million to $50 million.

Within four years of starting his research, Salk had identified three different types of the polio virus. From there, he was able to develop a vaccine. He started to conduct vaccine testing on children by 1952. The test phase ultimately vaccinated nearly 1.8 million children over a two-year period. In 1953, Salk vaccinated himself as well as his wife and children. By 1955, the vaccine was introduced to the public at large. The results were dramatic. The College of Physicians in Philadelphia reported that there were nearly 60,000 cases of polio in the U.S. in 1952. By 1962, that number had decreased to less than 1,000.

In addition to the respect he earned from vaccinating himself and his family during the trial stage, Salk earned the love of the nation when during an interview with famed newsman Edward R. Murrow, he was asked who owned the patent to the polio vaccine. Salk replied, “Well, the people, I would say. There is no patent. Could you patent the sun?”

Admittedly, the people did make a significant up-front financial investment in researching the cure, but Salk’s reluctance to patent the vaccine is widely believed to have deterred lawyers from making the effort. The lives it has saved makes it one of the most generous gifts given.