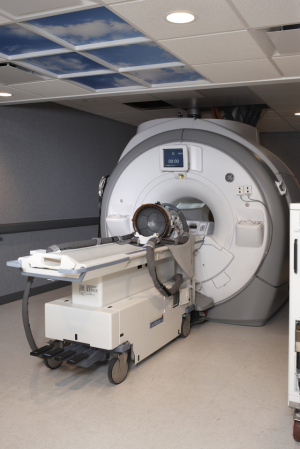 ExAblate Neuro (Credit: InSightec)
InSightec Ltd., a privately held Israeli firm partly owned by General Electric Corp., received the Food and Drug Administration's blessing to carry out a phase I trial of a Parkinson's treatment that uses MRI scans to guide blasts of ultrasound energy to destroy problem tissue in the brain.

The non-invasive treatment is one of several uses of the device now under investigation for the ExAblate family of devices of MR-guided focused ultrasound products. Other applications being researched include blasting cancers and bone metastases.

The device, called the ExAblate Neuro, uses focused ultrasound, pulses of ultrasound energy that can heat up tissue and destroy it. With the accompanying MRI scanner, doctors can guide the ultrasound blast, or sonication, using real-time imaging of brain anatomy, while monitoring the treatment's progress.

According to Eyal Zadicario, vice president of research and development, and director of neuro programs with the Tirat Carmel-based company, the device is being tested to target an area deep inside the brain, the thalamus, to relieve tremor, a common symptom of the Parkinson's.

This area is one of the same targets of deep-brain stimulating devices, surgically implanted, pacemaker-sized items that send frequent jolts into the brain to relieve symptoms of the neurodegenerative disease, he said.

Zadicario said they expect the study to start in the fall.

In the study, up to 30 patients with tremor-dominant Parkinson's will be recruited and randomized between the ExAblate treatment and a control sham treatment. Patients in the sham group would then be offered to cross over for actual treatment once their leg of the study is over, Zadicario said.

The lead test site will be University of Virginia in Charlottesville, which last year ran a trial on using ExAblate Neuro to treat 15 patients with essential tremor, a neurological condition whose treatment involves ablation of a nearby part of the brain, Zadicario said.

"The clinical attributes of the disease are different, but the technique of the surgical procedure is similar," he told DOTmed News by phone.

After the essential tremor study, Zadicario said patients had "very significant relief" in the tremor and more than half had "dominant relief."

There were some mild side effects, such as numbness in the fingers or lips, but Zadicario said that's a known after-effect of lesions in the brain area being treated, and that most were resolved after the first week.

Because the MR-guided ultrasound treatment is non-invasive and doesn't require surgical implantation of a device -- which runs on batteries and so at some point needs to be replaced -- GlobalData, a British market research firm, predicts that ExAblate or a similar technology could, if commercially approved by the FDA, eat into a huge chunk of the neurostimulation market, estimated at $1.8 billion in 2010.
1(current)
2