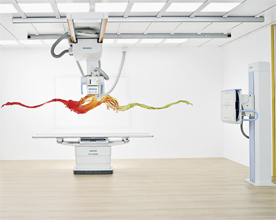 The new digital radiography system is being marketed as a "comparatively low" cost option, according to the company's promotional materials.

The DR Multix Fusion features a cassette-sized flat panel detector, a color touch display, a height-adjustable scanning table that can bear up to 660 pounds, and a nearly 6-foot-long telescopic column for the ceiling-mounted tube to be pulled down to reach patients' feet, Siemens said.

The model is a digital update on the film-based Multix Fusion that was released in March by the Malvern, Pa.-based company.