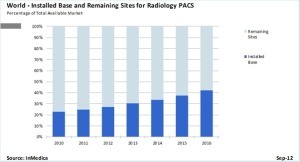 Source: InMedica
The market for PACS, RIS and cardiovascular RIS will grow by $1 billion to reach nearly $4.5 billion by 2016, according to a new market research teaser.

In a new teaser published Thursday, market research group InMedica said growth in these markets will be partly driven by hospital consolidation and demand for advanced analytics reporting.

"With growing demand for collaboration across the care-continuum, health care IT systems are increasingly being utilized to achieve enterprise integration and multi-disciplinary patient care," Rhian Thorburn, an analyst for the firm, said in a statement.

InMedica also said that the projected world installed base of PACS would almost double, rising from 23 percent of the total available market in 2010 to almost 42 percent in 2016. Radiology IT, at least for large-scale markets in North America, could actually reach a "saturation" point by 2015, InMedica said.

However, developed world hospitals would soon turn their attention to cardiology IT products, like CVIS, while the "increased acceptance" of radiology IT products in developing countries, such as Brazil and India, will drive their growth in those countries, InMedica said.

The report is "The World Market for PACS, RIS and CVIS- 2012 Edition."