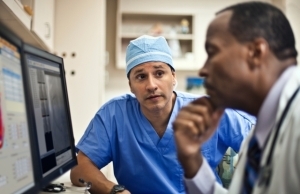 Courtesy of Philips Healthcare
At RSNA 2012, Philips Healthcare unleashed upgrades to many of its existing products, which the company said would mark the next chapter in Imaging 2.0, the initiative Philips launched in 2010. Many of the upgrades were based on customer feedback for ways to improve its imaging portfolio.

While Philips did not unveil new equipment at RSNA 2012 it did, however, showcase several new features and upgrades to its existing line of products that not only aim to improve collaboration between radiologists and referring physicians, but also improve patient safety and patient care.

Philips launched iPatient at RSNA this year, a workflow solution that's focused on the patient, that uses iterative reconstruction techniques, special software that can reduce noise and lower radiation dose.

"Because it increases workflow, it can increase patient flow," Andy Mack, director of CT product marketing at Philips, told DOTmed News during a demonstration of the new platform.

With less time and less up front planning, iPatient allows operators to render consistent images in five clicks with reduced time. Additional features synch up the CT system and the injector in order to deliver the right amount of contrast dose and therefore consistent image quality for the clinicians, according to Philips.

Mack also spoke about CT IMR, which he said was "a fundamental shift in CT imaging." The iterative reconstruction technique (IMR), launched at RSNA, provides high-quality, low-dose imaging for CT, according to Mack.

Philips also unveiled the latest version of Philips IntelliSpace Portal, expanding applications for nuclear medicine and CT. Already, the portal allows radiologists to access, analyze, diagnose, and collaborate with referring physicians — in real-time — on available CT, MR and nuclear medicine studies, from any networked device or their PACS.

As for PACS, Philips featured new advanced clinical applications to its IntelliSpace PACS 4.4, which it introduced last year at RSNA. Many of these new applications support cardiology, neurology, oncology, musculoskeletal, gastroenterology and digestive diseases, provided from a streamlined delivery model. In a statement from the Philips, they said this reduces the need for multiple, multi-vendor workstations in an effort to ease workstation administration responsibilities.

With patients in mind, Philips is addressing low-dose features on CT and PET/CT. Reducing dose to patients is a topic that has received a lot of attention over the past few years, not just from inside the industry, but from policymakers and the general public as well.

One of the main upgrades featured at the show focused on high image quality and improved dose management. iDose4 Premium Package, announced this summer, builds on Philips iterative reconstruction technique that allows operators to control and personalize the radiation dose. The new package includes the iDose4 iterative reconstruction technique and metal artifact reduction, or O-MAR, for large orthopedic implants, like prosthetic hip replacements. Philips said the technique provides up to 57 percent improvement in spatial resolution at low dose, and that the majority of iDose4 reference protocols are reconstructed in 60 seconds or less.

RSNA 2012 president: For radiology to thrive, it has to put patients first