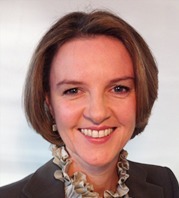 Dr. Geraldine McGinty
on imaging and the fiscal cliff
The last-minute bill that Congress passed on New Year's Day as part of the fiscal cliff package includes cuts to advanced imaging services.

"On January 1st there was a staggering array of payment cuts for imaging and radiation therapy," Gail Rodriguez, executive director of the Medical Imaging & Trade Alliance (MITA), a lobby for imaging OEMs, told DOTmed News. "A lot happened in one day."

Most prominently, a component of the Medicare payment formula that recognizes the amount spent on advanced imaging equipment will be reduced in the bill that President Obama signed into law early this morning. The Affordable Care Act raised the utilization rate from 50 percent to 75 percent but under the new legislation, advanced imaging services are reduced by 90 percent to reflect a higher presumed utilization of imaging equipment, according to Dr. Geraldine McGinty, chair of the American College of Radiology's Commission on Economics.

This reduction is expected to go into effect in 2014.

"The problem is that this comes on the heels of a number of arbitrary imaging cuts since the Deficit Reduction Act in 2006," McGinty told DOTmed News. She said they will have the most impact on outpatient imaging centers as well as small and rural practices that provide imaging services.

Hospitals will also be affected by the increased utilization rate.

Rodriguez said cuts to radiation therapy total about $400 million and cuts to imaging for the 90 percent increased utilization rate will cost about $800 million.

Tim Trysla, executive director of Access to Medical Imaging Coalition (AMIC) told DOTmed News that it's just one piece of the formula for cuts that are already in place in the physician fee schedule for 2013.

"We don't know the total impact just yet of how all those moving parts get incorporated into a net impact to the average practice," he said. AMIC will work on gathering that information, according to Trysla.

In addition, the House of Representatives did not address the multiple procedure payment reduction (MPPR) on the professional component of radiology services in the fiscal cliff legislation.

"We had been working with Congress over the last several months to try to put in place a bill that would prevent multiple procedure reductions for radiologists. We had a good level of sponsorship in the House and Senate but unfortunately, that did not get included in the bill going forward," said McGinty.

In other words, the rule is extended across group practices. For example, if one radiologist reads a CT scan from a patient and his or her partner in the same practice reads an MRI scan from the same patient on a different body part later in the day, the second reading is discounted 25 percent.

"We fought hard against it with CMS and didn't get traction. That's why we were pursuing legislative action and that unfortunately did not get included in fiscal cliff negotiations," said McGinty.