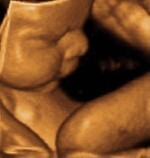 4-D ultrasound image of fetus
As reported by By Blythe Bernhard of the Orange County Register and reprinted in the ChicagoTribune.com.

SANTA ANA, Calif. -- Like any baby, Sienna Rose Carr smiles a lot. She can make everyone laugh by flashing the peace sign. Her parents swoon when she rubs her little eyes. They say she has her daddy's lips and her mommy's nose.

Sienna is a natural in front of the camera, and she's not even born yet.

With four-dimensional ultrasound imaging, parents-to-be can find out a lot more than just their baby's sex. The startlingly clear picture of the baby reveals every movement and facial feature. Some babies open and close their eyes. Others wave, smile or frown.

Yeah, it's healthy to peek at a baby in the womb.

But for many parents--to the consternation of some physicians--it's also an incredible entertainment experience.

"You get to put a face to all that moving and kicking," said Lisa Carr, 31 weeks pregnant when she had an ultrasound at Before the Stork in Anaheim Hills, Calif.

"It's such a wonderful way to bond with the baby."

Keepsake ultrasound studios are springing up around the country as advances in imaging technology allow for better pictures of babies than are seen in the traditional, two-dimensional ultrasound taken in a doctor's office.

Ultrasounds, also called sonograms, use reflected sound waves--not X-rays--to create a picture of a developing fetus. The tests typically are done once, at about 20 weeks gestation, in a doctor's office to determine the size of the baby and to check for any birth defects.

The more high-tech ultrasound videos taken in portrait studios are not intended to replace diagnostic medical ultrasounds and are to be used only as a memento, the business owners said.

But after Tom Cruise said recently that he had purchased his own sonogram equipment, doctors reissued warnings about using the $50,000 to $100,000 machines for entertainment.

"They're looking at this as a video camera," said Dr. James Borgstede, chairman of the American College of Radiology's board of chancellors. "Ultrasound is a medical exam and it should be used in the hands of physicians."

Although fetal ultrasounds are generally considered safe, lengthy exposure or the wrong technique can be harmful, according to the Colorado physician.

"Energy is being put into this baby and that energy has to be dissipated in some fashion. Usually that's through heat," Borgstede said.

"You have the potential to cause chromosomal damage and also tissue damage."

Several organizations have come out against the use of ultrasound machines for non-medical purposes, including the FDA, the American College of Radiology and the American Institute for Ultrasound in Medicine.

But other doctors recognize the popularity of the 4-D pictures and offer them in their own practices, including Orange Coast Women's Medical Group in Laguna Hills, Calif.

Terri Siegel and her daughters, Kim Welch and Ashley Kinnett, all of Yorba Linda, Calif., operate Before the Stork and attended a one-week training session in Austin, Texas, to learn how to perform the sonograms.

All of their clients sign a waiver acknowledging they are under a doctor's care.

Each session lasts half an hour and costs about $200, including a DVD. Most clients come for one session when the mother is about 27 to 31 weeks pregnant.

Watching parents see their baby's faces for the first time never gets old, the women said.