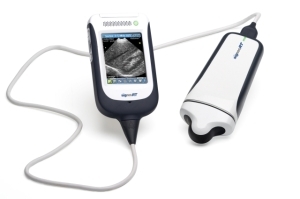 The product, called the Signos RT, is already available for sale in Australia and Europe, but is pending U.S. Food and Drug Administration 510(k) clearance.

A company spokesperson for Signostics told DOTmed News that Konica Minolta has the exclusive rights to market and distribute the Signos RT under its brand Sonimage P3 in the U.S. when it's cleared by the FDA. It will do the same in Japan, China and India.

The company holds the right to both the veterinary market and the human market.

Signostics launched the Signos handheld ultrasound in 2009. It's been adopted widely among rural and respiratory doctors, physiotherapists, continence nurses, palliative care specialists, and companion animal veterinarians. The new model gives users the ability to view ultrasound images in real-time. This was not possible on the older version.

Signostics was established in 2005 in South Australia where its headquarters remain, with sales operations in Palo Alto, Calif. Konica Minolta is based in Japan with offices worldwide.