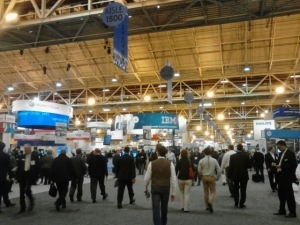 HIMSS 2013 brought in
100 more exhibitors than last year
and 32,718 attendants.
HIMSS 2013, which took place this week in New Orleans, brought in 100 more exhibitors than last year along with 32,718 attendees — all of whom most likely toted iPhones, iPads and other mobile devices. Those ubiquitous gadgets were a major focus of the conference, but so was patient engagement, how to get value from patient data and how to make a return on HIT investments with all of these factors in mind.

These are our top observations from the show, but if you saw something that caught your eye at HIMSS13 that we missed, drop us a line in the comments section.

Now that patient data has been digitized, a big question providers should be asking is how that information can be used to improve care and lead to cost savings.

One solution presented at HIMSS13 is "orb" from Philips, a graphical dashboard that sorts and processes clinical data to give a clearer picture of what's going on with a specific patient. It can also visualize patient populations to identify areas that need improvement. Different colored and sized spheres represent areas such as cardiovascular, renal and central nervous system.

"Clinicians are monitoring so many patients, and there's only so much data the physician can take in," Joe Sovak, vice president of marketing for Philips Healthcare North America, told DOTmed news. "This program helps make sure they don't miss something."

2. Nothing about me without me

During Dr. Eric Topol's keynote speech on Tuesday, the nationally recognized cardiologist emphasized the importance of patients at last being privy to their own health information and using modern technologies to save money and make care easier.

Providers are often apprehensive about the patient involvement element of meaningful use initiatives, so vendors have been working to make patient portals as useful and intuitive as possible. Agfa HealthCare released a new patient portal at HIMSS that includes the patient's own medical images. Siemens showed a patient portal integrated with Soarian Scheduling, so patients can see appointment availabilities at hospitals.

3. Bringing in a financial return

In the HIMSS13 leadership survey, 23 percent of respondents said they expected to get a $2 million to $3 million return on their investment for meaningful use stage 1. A recent study of physicians dissatisfied with their return on EHRs shows why vendors are so focused on making those hopes a reality.
1(current)
2