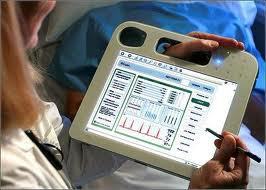 The mobile health industry is getting impatient. Experts representing mHealth companies and investors testified before Congress Tuesday, saying a two-year wait for final guidance from the Food and Drug Administration on how it will regulate medical apps is putting a chill on the sector.

"There's an awful lot of business frozen on the sidelines waiting for what that guidance says," Bradley Merrill Thompson, a lawyer with the mHealth Regulatory Coalition, told the House Subcommittee on Communications and Technology.

In the hearing, the first of three on health IT scheduled this week in Washington, industry experts also warned that fledgling app companies could suffer if a 2.3 percent excise tax on medical devices that went into effect this year applies to FDA-regulated apps. The tax, which falls on revenues, not profits, could make mHealth startups less appealing to investors, a panelist warned.

"Revenues are ploughed back into the company for growth, therefore the 2.3 percent tax on startup companies...increases the amount that must be invested before companies become cash-flow positive," said Dr. T. Forcht Dagi, a neurosurgeon and partner at HLM Venture Partners. He said some companies might opt to release apps in other markets, where they wouldn't be taxed.

The FDA released draft guidance on mobile health apps in July 21, 2011, suggesting its regulatory focus would be clinically riskier technologies, such as apps that let radiologists make diagnoses off X-ray images on their iPads.

Through a series of meetings and workshops with the industry last year, the watchdog agency also hinted its final rule would be "de-regulatory" — that is, it would explain what low-risk apps, such as educational tools, drug reminders, body-mass index calculators and diabetes management guides — it would overlook, according to written testimony from Richard Jarrin, senior director of government affairs for chipset-maker Qualcomm.

But two years later, there hasn't been a final ruling, and the uncertainty is making the industry uncomfortable.

Ben Chodor, the CEO of Happtique, which certifies health care apps, testified that some doctors and companies could be reluctant to develop or release apps until they see final guidelines. "They're not going forward because they're waiting," he said.

Still, not everyone is holding back. In his written testimony, Jarrin said 500 new health apps are released every month, up from about 400 a month last year.
1(current)
2
3