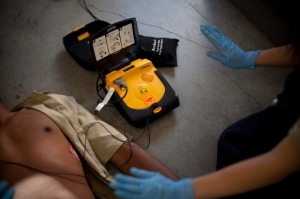 The automated external defibrillator industry is about to get a bit of a jolt. In March, the Food and Drug Administration released a long-inthe- works proposed order that will toughen the procedure for getting the devices on the market after a number of high-profile recalls. It’s unclear exactly how this will affect AED-makers, but it could dramatically increase the money and time needed to commercialize the life-saving equipment.

Not everyone is happy about this. The fear is that the new regulations could, by making it harder and more expensive to commercialize devices, discourage innovation or raise the costs of AEDs. Pricier automated defibrillators, which already run between $1,000 and $2,500 per unit, could make it less likely that budget-strapped public facilities will have them on hand in an emergency.

“I hope the public won’t be confused by reports of device failures and think they shouldn’t be involved in helping to save a life,” says Mary Newman, the head of the Sudden Cardiac Arrest Foundation, which it should be noted is sponsored by AED manufacturers. “As it is, it’s an uphill battle for people to understand how simple these devices are to use.”

But the current, lighter regulations have risks, too. Consumer and patient safety advocates had long warned that AEDs, as life-supporting devices, ought to be held up to a higher regulatory standard, and that over the past decade hundreds of thousands of defective or potentially malfunctioning devices have been recalled — some which have even failed during resuscitation attempts in which the patient died.

“We don’t oppose these devices or their use,” says Dr. Michael Caroome, with Public Citizen, a watchdog group that has argued for the reclassification of the devices. “We think they should be appropriately studied and tested before marketing to protect the patients on whom they’re used.”

AED use in perspective
Thanks to a variety of state laws and health campaigns, you can now find AEDs in many public places, such as schools, airports and malls. They’re widespread, because sudden cardiac arrest, the condition they’re meant to counteract, is one of the country’s leading killers. According to the SCA Foundation, about 360,000 people in the U.S. experience SCA out of the hospital, and about 90 percent of them die.

SCA is usually caused by ventricular fibrillation, in which the heart’s lower chambers quiver erratically, causing the heart to stop pumping blood, according to the National Institutes of Health. Death occurs within three to five minutes; thus, quick intervention by bystanders is critical to survival.
1(current)
2
3
4
5
6