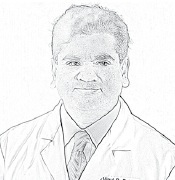 “The future of” column provides a quick look at predictions for the sector from some of the top minds in the field. This month, we feature Dr. Vipul Patel.

Robots will also help surgeons get up close and personal to a surgery even if it’s being done in another country. He predicts that telesurgery will become more common thanks to the capabilities of future robots. Less experienced surgeons will be able to get real-time advice from robotic surgery pros located anywhere in the world. The first step towards that future isn’t complicated, but it is at the core of many facilities’ health IT woes: wireless connectivity. “The biggest problem we have now is the time delay between motion and action,” Patel says.
1(current)
2